She Who Knows by Barbara Bras

Purchase your copy of She Who Knows here. 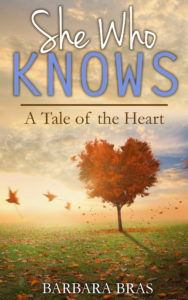 One girl’s journey from loneliness to love. Isolated on a Maui mountaintop, Cassandra has only her imagination to keep her company. Shut in due to her heart condition and shut out emotionally by her father, she meets the Menehune in a dream. Their “Gift” enables her to take the first step away from her loneliness. Along the way she finds an amazing woman in the grandmother she never knew and experiences true friendship with a new classmate. Eventually she learns that to love another she must open her heart, even if it means it may break.

A journey of a lonely girl who learns that to not be lonely anymore, she must open her heart for others to see her inner self. I felt the emotion of Cassandra as she is alone, longing for the acceptance and interest of her father who is too busy grieving. I felt her joy at forming a relationship with her grandmother that empowered her to realize that she can have a relationship with someone who truly cares for her and who she truly is. I felt her fear and sense of adventure as she grows into a woman and learns about both heartache from loss and the value of a true loving relationship that endures. The characters in this book were so clear in my mind, and I found myself sitting at the kitchen table with the characters, and riding horses with the characters and making discoveries with Cassandra. My mind wandered with the fantastic flare the book offered with Cassandra's "gift". What really stood out to me was the settings offered and how clear they were in my mind. I wanted to be there with the characters! The plot was twisting and moved from dream like fantasy to harsh reality, to joyful reality. The characters were dynamic in how they grew for the better in the midst of their personal struggles, and also in relationships with each other. She Who Knows was thrilling, dreamy, and full of heart and soul. It brought true emotions to my heart and soul. Bravo, Ms. Bras! I received this book for free in exchange for a fair and unbiased review. 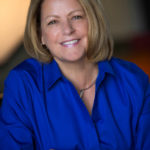 In 2015, Barbara Bras left her career to pursue her dream of serving God. She believed that her first step would be to share the amazing ways God had blessed her. As she wrote of her son’s miraculous adoption and the challenging years that followed, it led to the rediscovery of her entire life, including the history of her grandparents’ remarkable survival in Armenia and her search for purpose and love. Her memoir led to her first novel, which she hopes readers will find engaging and memorable.

An interviewer asked what inspired me to write and publish two books within a year. It’s a long story. Unlike many authors, I didn’t always write, nor did I yearn to write. In fact, the opposite was true for me; fear of judgement discouraged me from writing. Judgement from my mother, an English teacher and a strict perfectionist who demanded excellence in everything, especially writing.

In spite of the circumstances, my love of reading led to my first profession, teaching English at the high school level. Teaching laid the foundation for my career, which ultimately resulted in twenty-five plus years in various corporate environments as an Human Resources leader. Naturally, during my career I wrote a great deal, including proposals, papers, and communications of all kinds. But never anything creative, I never even journaled.

Almost two years ago, our Pastor handed out little pieces of paper during his sermon that said, “ENOUGH”. He questioned our inane desire to accumulate things when we already have the one thing that is needful. Just as Mary choose to worship at the feet of Jesus rather than be distracted by the world, so must we choose what is most important. (Luke 10:42) It struck a nerve.

Shortly thereafter, I made the decision to leave my position of ten years. Unsure of my next move, I focused my energy on a burning desire. Ever since the Lord provided a son for us through a miraculous adoption, I believed He wanted me to share it as an encouragement to others. I had tried to write the story many times without success. I signed up for retreat that promised, “Write your book in a weekend!”

The three-day retreat required nonstop writing, first in long hand, then on the pc. Amazingly, at the end of the third day I had not only finally written the story of the miraculous adoption, I had shared the incredible disappointment and heartache of the years that followed, all captured within the context of my life and the life of my ancestors. Wrapped in God’s Grace, a Life Rediscovered had materialized. I felt a great release and I thought that would be the end of my writing.

Over the next few months as I edited the book, I followed the system of editing for 45 minutes, and writing new material for 15. What emerged during those 15 minute segments became Cassandra’s story, or She Who Knows, a Tale of the Heart. The story unfolded in front of me, inspired by the woman who supervised my student teaching in Honolulu back in 1977.

Barbara Robinson was an inspiration to me both as a teacher and as a person. As we worked together that semester, she shared many stories and took me under her wing. She told me the story of how her grandmother, a musician, had come to islands and married her seafaring grandfather. She spent a great deal of her childhood isolated in the mountains on Maui, presumably to recover from an illness. When finally allowed to return to school years later, her years of isolation and her archaic English made for a lonely life. She also believed she that she had an usual gift, which she decided was better left unused.

So what began as an effort to share my story and encourage others has developed into a love of writing and a desire to serve the Lord through my new passion.

Soli Deo Gloria. To God Alone Be the Glory! 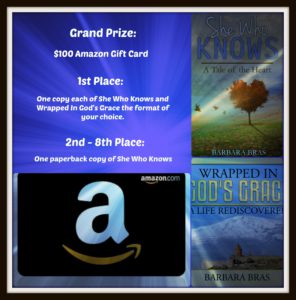 To celebrate her tour, Barbara is giving away a $100 Amazon gift card, copies of She Who Knows, and Wrapped In God’s Grace. Click here to enter: https://promosimple.com/ps/9f1e
Posted by Katie at 4:34 PM