Manuscript for Murder by Chautona Havig 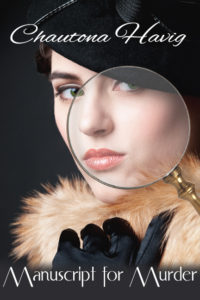 Author, local celebrity, fashion connoisseur. She chose Fairbury for its close proximity to Rockland, its small town atmosphere, and its low crime rate. Then someone made her life a literary cliché. A mysterious accident with a light bulb sparked an interesting idea for her latest novel—and for Fairbury’s new serial killer. The first replication infuriated her. The second left an even worse taste in her mouth. The third blasted more than her self-confidence, and the fourth beat her down so far she’s considering giving up writing completely. Who is killing Fairbury’s citizens, and furthermore, why and how are they using her novels to do it?

Alexa Hartfield- an endearing character that we all wish we were more like! Not so much because she's a celebrity, but because she lives the way she wants down to eccentric and period wardrobe. I personally wish I had the guts to walk down the street in a Jane Austen regency gown! Not only that, our character is down to earth and really cares about people. The plot of this story turned me on my head- why was someone using Alexa's books to inspire murder, and is it Alexa's fault that people are dying? All the characters had an obvious role and were well developed. Picturing a murder mystery within an author of murder mystery's world was no easy fete! I enjoyed every page, and I appreciated the honesty, twists, and turns found in the plot and characters. Endearing and unique characters and a perplexing murder mystery make this book a 5 star!

I received this book for free, and all opinions given are my own. 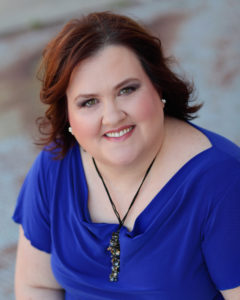 Chautona Havig lives and writes in California’s Mojave Desert with her husbnd and five of her nine children. Through her novels, she hopes to encourage Christians in their walk with Jesus.

How Arrows & My Obsession with Vintage Clothes Inspired Murder A swath of fabric cut across my bedroom at an odd angle but that angle ensured that I could stretch it all out. With painstaking precision, I pinned every last piece to the fabric, disgusted at the enormous waste stretching out before me. The pattern called for three and a half yards. I’d crammed it into two at most. Just as I picked up the scissors for the first cut, Mom popped her head in the door to see how I was doing. I pointed out the waste. “Grandma said patterns always told you to buy way too much, but I’ve got enough to make another dress!” Mom stepped closer. I want to say a cigarette hung from her lips, but let’s face it. No way would Mom ever allow the ashes to drop on the carpet. But it felt like one was there, nonetheless. Mom pointed. “Chautona, I don’t know anything about sewing, but I think those arrows are there for a reason.” And with that, she turned away. I stared down at the pattern. My arrows zig-zagged all over the place. A glance at the directions showed all arrows going exactly the same direction. Straight up and down the fabric. You know, if I’d been doing this for the first time in 2017, I could have just zipped on over to “the Google,” as Mom calls it, and looked up why. Instead, I grabbed a thick sewing manual I’d bought for a buck at Pick-N-Save and flipped through it until I found a section on laying out patterns. A couple of minutes later, I flew down the stairs. “The book says that the long, smooth edges are called selvages. The arrows are supposed to run parallel or the dress might hang wonky.” Here, I can guarantee Mom took a puff of that cigarette. Man, I hated those things. “Well, like I said. I don’t know anything about sewing, but they looked important.” She blew a puff of smoke. That’s when I suspected that Mom knew more about sewing than she’d let on. What does this little sewing lesson have to do with mysteries and murder? Well, see. This was a test dress. I’d only decided to learn to sew because I’d also decided that I wanted Nancy Drew’s wardrobe. In 1982, you couldn’t buy trim, neat clothing from the 50’s. I had Gunne Sax skirts and preppy tops with ruffles that my parents hated. When they found out I wanted a sewing machine to make clothes like that, they got me one. Yep. I cut my reading teeth on Nancy Drew and didn’t stop there. I read all the youth mysteries—Bobsey Twins, Trixie Belden, Hardy Boys, Meg Duncan (she was a fave, too), and when I got a little older, Phyllis Whitney. I loved the challenge of seeing events play out—and figuring out why. Why told me who. You get to where you can figure out things rather easily. But if you make me doubt my ideas, that’s good enough. I love that. Is it any wonder that one of the first books I conceived was a mystery? I’d never put the ideas together until I began working on this post, but really… is it any wonder that I gave that author a love of vintage fashion? Too funny. But those arrows on that pattern? They taught me pretty cool lessons as a kid. Like Mom said: “Those arrows are there for a reason.” Isn’t that what God’s directional arrows in His Word are like? They’re there for a reason. They keep us from getting all wonky. It’s why Alexa writes the kind of books she does. I never could, but as she says when she describes telling someone why she writes horror/suspense, “I tried to describe a world where we never see justice—where sin surrounds us, but the only response we see is a sweet romance or a heartwarming tale of doing good to our neighbors… And God is a God of more than love and mercy. [He’s also a God of] justice.” Alexa writes what she does to help people sort out those crossed arrows and see that there is a point to it all—that eventually justice and mercy converge paths into one rather than criss-crossing all over the place, trampling each other. She doesn’t write Christian fiction, but I don’t know how a Christian can write fiction without some part of faith shining through. In Alexa’s, and I hope in mine as well, there’s an overarching theme that illustrates that the Lord hasn’t forgotten the people He created. 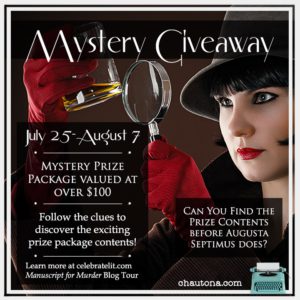 In honor of her Manuscript for Murder Celebration Tour, Chautona is giving away a mystery prize package worth over $100. Enter here: https://promosimple.com/ps/bc16

Would you like to know what’s in it? Find the first clue within the giveaway image below, then hop on over to Chautona’s website to begin the search for more clues and you might find a special giveaway just for clue hunters! Can you find all the clues before Augusta Septemus does?
Posted by Katie at 5:38 AM