No Turning Back by Katie Vorreiter 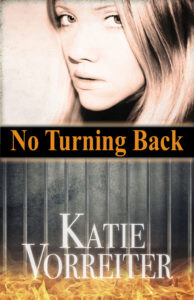 Chronic panic attacks have stolen Livvy Fischer’s classically trained soprano voice and derailed her life. Due partly to a mix-up, partly to her crush on Pastor Lucas, Livvy joins a worship team bound for the chapel at San Quentin. But when a full-scale riot breaks out, she is separated from Lucas and the rest of her group. Survival becomes this song bird’s sole focus.

Snatched from the chapel by an inmate, Livvy doesn’t know who to trust. Tobin says he’s protecting her, but she’s been blindsided before. She struggles to put her trust in God, while all too aware that free will can wreak horrible consequences. Tobin wants her to hide and ride out the prison storm, but Livvy becomes the obsession of another inmate who is a serial killer. Will God protect her? Will Tobin?

It’s one thing if Tobin is turning his life around behind bars. It’s quite another to fall for him.

What a book for a debut novel! I was thrust into a scene I don't believe I have read before- a prison riot with innocent visitors caught in the crosshairs. The sheer idea makes me shudder just like our heroine. I think Tobin was so unexpected, and I really enjoyed watching him and Livvy interact. The action was constant, and you will catch your breath more than once. The thread of faith and redemption is so beautiful. The scene was depicted so well I was instantly transported into the mayhem behind bars myself. I really felt the realities of prison life (without being obscene) were portrayed in a clear way. The serial killer villain was so evil- he really gave me the goosebumps, and the hide and seek that ensues is a thing to behold. Overall, props to the author for such an action-packed, yet faith filled book that kept you on the edge of your seat until the final page. Also, the very slow-blossoming romance is very sweet and honest- reminded me of a kind of Beauty & the Beast type vibe. I'll be looking for more from this author! Recommended for the suspense reader that is looking for a faith message and a thread of romance. 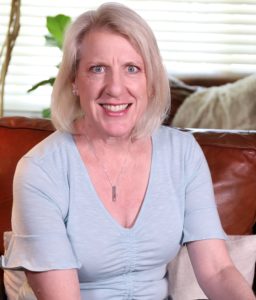 Katie Vorreiter is an award-winning writer and copyeditor. She makes her home in the San Francisco Bay Area with her husband, two children rapidly morphing into young adults, and a ridiculously adorable cockapoo. No Turning Back is her debut novel.

I’m often asked where on earth I came up with the premise of No Turning Back. My good friend and pastor had me spellbound with his stories of taking softball teams into San Quentin, the maximum security prison for men. What a ministry! He had a few funny tales, but what stood out to me were the cautions the team was given upon entry: they had to sign a form acknowledging that in the event they were taken hostage, the California Department of Corrections and Rehabilitation would not negotiate for their release. Say what? That got me thinking about what it would be like for a woman in such a situation. There are female corrections officers, certainly, as well as woman food service workers and volunteers in a range of capacities. But I wanted a true fish-out-of-water character, and thus Livvy was born. Because of a terrible event in her past, she’s hypervigilant about her personal security. She’s also tiny and, of all things, an opera soprano. Once I had my Livvy, I threw her into a full-scale riot at a men’s correctional facility. Poor thing. But, of course, she’s got God on her side, and he tends to tip the scales. Yet, as all Christ followers are aware, prayer, even unto the God of the universe, is not a get-out-of-jail-free card. Pun intended. We know—all too painfully sometimes—that Jesus was right when he said we’ll have troubles here on earth. God is with us through the storm and works all things together for good, but there’s no guarantee that he’ll remove the storm and it’s often hard to see the good when we’re in the middle of not-so-good. What role, then, does prayer have in the face of the free will of a person intent on evil? If you want to know the answer, read the book. Just kidding. The story is a fast, fun ride and delves into some deep areas, but I don’t pretend to answer the questions of the ages. If you like chewing on these kinds of issues—on your own or with friends­—check out the No Turning Back discussion questions on my website. Don’t worry: the story isn’t all dark. In most situations, I can’t stay serious for long, so you’ll find some humor, as well as not one but two hunky romantic options. I really hope you like it. If you want to chat, drop me a note on Facebook or on my website.

To celebrate her tour, Katie is giving away the grand prize of a $40 Amazon gift card!!
Be sure to comment on the blog stops for nine extra entries into the giveaway! Click the link below to enter.
https://promosimple.com/ps/eb99/no-turning-back-celebration-tour-giveaway
Posted by Katie at 6:47 AM