Brand of Light by Ronie Kendig


There’s a price on her head, and it has everything to do with the brand on her arm. 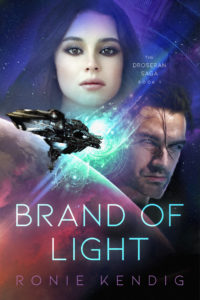 Tertian Space Coalition has blessed every planet in the quadrants with high technology, save one: Drosero. But in spite of their tenuous treaty with the ruling clans, TSC has plans for the backward planet. And they’re not alone.

After a catastrophic explosion, Kersei Dragoumis awakens in a derelict shuttle, alone, injured, and ignorant of the forbidden technology that has swept her into a nightmare. The brand she’s borne since childhood burns mysteriously, but the pain is nothing to that when she learns her family is dead and she is accused of their murders.

Across the quadrants, Marco Dusan responds to the call of a holy order—not to join them, but to seek a bounty. Gifted—or cursed—with abilities that mark him a Kynigos, a tracker sworn to bring interplanetary fugitives to justice, Marco discovers this particular bounty has nothing to do with justice and everything to do with prophecy. One that involves the hunter as much as the hunted.

What a ride this book is! You are instantly transported to a place that is unfamiliar, adventurous, scary, and chills you to the bone at times. The action is pretty much non-stop. The fantasy world is extravagant with words that are from another time and place. The fast pace keeps you glued to the page. I really did feel part of the world with the beautifully developed characters and was peeking around the corner with the characters to see what would happen next. This book is like Kingdom of Heaven meets Chronicles of Narnia meets The Matrix. That's the best way to describe it. I have to be honest, though, if you're not a fantasy/scifi reader, this one probably isn't for you because the language and world within are intense and it was easy to get lost along the way if you don't take time to really absorb what everything means. So fantasy/scifi/futuristic readers, rejoice! This one is an epic! 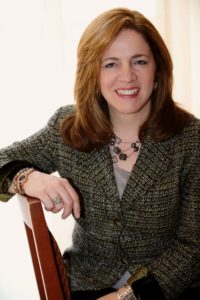 Ronie Kendig is an award-winning, bestselling author of over twenty titles. An Army brat, Ronie lives a shot train ride from New York City with her husband, twin sons, and two fur-sons, VVolt N629, a retired military working dog, and Benning the Stealth Golden. Described as an empath by her literary agent, Ronie has used her degree in psychology to write books that have won the coveted Christy Award, Romantic Times Reviewers’ Choice Award, HOLT Medallion Award, and more. Her books have also hit the CBA Bestseller List multiple times.

In November 2005, I lurched into a story that started with one small element—what if a hero could literally smell fear? And so I delved into the story with the characters, and felt like I’d fallen into the vortex. I wrote over 90,000 words in one month, this story just gushing out of me. But I was a very new writer. And if you saw the first draft that gushed out of me, you’d snicker. I sure have. It’s appallingly bad writing, yet the story’s bones are healthy and intact. So, I teased the story into shape over the last fourteen years. In 2012, I took a hard look at it and tried to shape up the writing. I’d even gotten to know Kathy Tyers, who wrote for the Star Wars franchise as well as the much-beloved Firebird series (*insert reverent pause here*), and I bravely asked if she would take a peek at the first fifty pages or so. Being gracious as Kathy is, she agreed to take a look. Um, yikes. Haha. Make no mistake—Kathy is a brilliant writer, and I will never write like her, but I learned so much her feedback and took it to heart. Clearly, I still had a long way to go before that story was ready for the world, so I delved into honing my craft and deepening this story. Honestly, I was afraid show Brand of Light to anyone again, because I love this story so much and did not want to see “her” fail. Nore correctly—I did not want to fail this story. About three years ago, I sensed a deep conviction that it was time to stop hiding and, as an act of faith and obedience to what God had given me, to send Brand of Light out into the world. As I write this, she is still 1.5 months out from the release, and I’m scared. I want this beauty to be loved, but even if it’s not, *I love this story and know I honored God with my writing and sending her out. I can rest here for a long while, reveling in the gift God gave me with this storyworld and its characters. I’m excited to see her launch out into the deep now. As Marco and the hunters always say, For Honor. 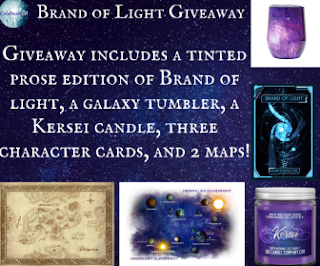 To celebrate her tour, Ronie is giving away the grand prize package of a Tinted Prose edition of Brand of Light, Galaxy Tumbler, “Kersei” Dio Adorable Candle, 3 Character Cards (to include Marco, Kersei, Tigo), and 2 Maps (to include Drosero and the planetary map)!!
Be sure to comment on the blog stops for nine extra entries into the giveaway! Click the link below to enter.
https://promosimple.com/ps/f2e2/brand-of-light-celebration-tour-giveaway
Posted by Katie at 6:15 PM