Legacy of Lies by Christy Barritt 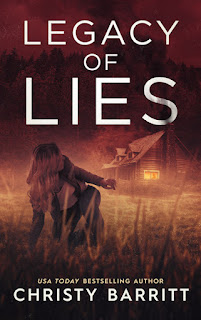 The justice system failed her family—and so did her hometown.

Madison Colson knows deep down that her father—a convicted serial killer—is innocent. But believing it and proving it are two entirely different things. Unable to help her father, Madison has spent most of her adult life overcompensating by helping others. When her aunt dies unexpectedly, duty calls her back to Fog Lake, Tennessee, a beautiful but painful place she’d rather forget.

Terrifying events begin to unfold once she arrives, unleashing her worst nightmares. The Good Samaritan Killer—or a copycat—is back, and now Madison Colson is his target.

FBI Special Agent Shane Townsend is determined to stop the deadly rampage that has sent the tightknit community into a frenzy. But he needs to earn Madison’s trust first. The task feels impossible, especially considering his father is the one who put her dad in prison.

With the whole town on edge and pointing fingers, tension escalates out of control. Madison and Shane must sort the facts from the lies—and fight for a legacy of truth—before The Good Samaritan Killer has the final say.

Legacy of Lies starts with that spine tingling sensation you get when fear takes hold of you and doesn’t let up until you end the book. You never knew what new twist awaited you on the next page. I really enjoyed the character development of Madison and her brothers dealing with grief and trauma in different ways and thought it felt very authentic. I was reminded of a Criminal Minds vibe without overly gory detail though the book was really a formidable crime thriller. I felt the agents were a little static in character development, and the romance that was weaved in seemed a little out of place. I also felt that there was quite a bit of info dump at different points in the story line that interrupted the natural flow of reading. With that said, I think this book is a solid choice for anyone who enjoys a good thriller or crime/detective drama.
I received a complimentary copy of this book, and all opinions given are my own. 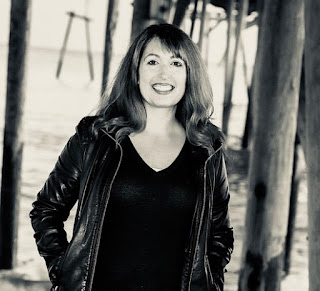 A USA Today and Publishers Weekly best-seller, Christy writes both mystery and romantic suspense novels that are clean with underlying messages of faith. Her books have sold more than three million copies, one has been made into a TV movie, and another is being developed for a TV series.

Christy’s books have won the Daphne du Maurier Award for Excellence in Suspense and Mystery, have been twice nominated for the Romantic Times Reviewers Choice Award, and have finaled for both a Carol Award and Foreword Magazine’s Book of the Year.

She’s married to her prince charming, a man who thinks she’s hilarious–but only when she’s not trying to be. Christy’s a self-proclaimed klutz, an avid music lover who’s known for spontaneously bursting into song, and a road trip aficionado.

Christy currently splits her time between the Virginia suburbs and Hatteras Island, North Carolina. She loves spending time with her husband, her two sons, and her four dogs.

I wrote Legacy of Lies after watching an interview on TV of a woman whose father killed several people. I tried to put myself in her shoes. How did she cope under the weight of what her father had done? How did people treat her differently? How did her father’s decisions affect her future? From there, I had the idea to highlight a group of three siblings who were dealing with this. I’d already done another four-book series in the mountain town of Fog Lake, Tennessee, and I really loved setting those books there. I decided to revisit the area and make it the place where these three siblings had grown up—and where they had to return.

For Him and My Family, March 21

Because I said so — and other adventures in Parenting, March 28 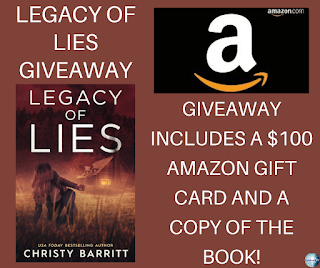 To celebrate her tour, Christy is giving away the grand prize package of a $100 Amazon gift card and copy of the book!!