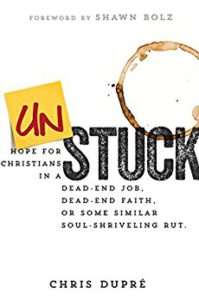 Do you feel like you missed the boat? Are you burnt out? Have your feet been dragging the sidewalk? Do you catch yourself dreaming of what could have been? Of if-only-I-had, or if-only-I-hadn’t? This book is for anyone sitting in the audience who should be on stage, anyone reading blogs who should also be writing them, anyone supporting ministries who should be leading them. It’s for the Christians who know there is a better life, but who are just stuck in the one they’re living. Saved in the Jesus Movement of the seventies, Chris DuPré connected with countless Christians across the world. Yet too many of those Christians, Chris discovered, have years later lost the fire and stepped back from living out their faith. Why? Because they got stuck—stuck in rejection by others, stuck in fear of the unknown, stuck in loving a comfortable life, stuck in scores of similar ruts. What can set them free from their internal prisons? And what could Christians accomplish if we all just got unstuck?

I can't thank Mr. Dupre enough for pointing me to the truth of the Scripture in such a clear, simple, and practical way in the area of being plain stuck spiritually. What a blessing and encouragement to my soul this book was, and all because he centered around truth of the Bible and how to apply it. I tend to be someone who lives in fear- I totally understood him when he was talking about that fear that paralyzes you before you can speak or move. I have the fear of rejection which is why I tend to be a people pleaser over pleasing God. Comparing my journey to others families is so easy to do with social media nowadays, and pride I think is a stumbling block for us all if we're honest. I was encouraged to listen for the voice of God and take that leap when He calls me to do something, the "out of the box" moments when my fear of rejection or failure tend to make me stand on the sidelines. One thing I really liked in the book was that "you can't go around fear, you have to go through it." It acknowledged the fact that fear is a reality in our lives, but God is greater still than all that fear and He will help us walk through it and uphold us. The importance of our personal creativity, and being reminded of our identity in Christ is so important to understanding how the Lord wants to use our gifts to glorify Himself. The story telling Mr. Dupre included at the beginning of the chapter about different icons in culture or personal anecdotes really helped me to fully understand the concepts he was trying to get through in that chapter. I would recommend this read to any Christian who is hiding, feels like a failure, or just needs encouragement to be who God created them to be! It's an easy read that's full of truth! Don't miss out!

Originally from Upstate New York, Chris moved to Kansas City to work alongside Mike Bickle in establishing the International House of Prayer. Chris recently served as Associate Pastor at Grace Center Church in Franklin TN, and is now an associate pastor of Life Center in Harrisburg, PA. A pastor, teacher, worship leader, traveling speaker, and spiritual father to many, Chris may be best known for his song “Dance With Me.” He has produced eight albums and published three books, including The Wild Heart of God (Whitaker House, 2016) and The Lost Art of Pure Worship with James Goll. Parents of three daughters and grandparents of four grandchildren, Chris and his wife, Laura, reside in Harrisburg, PA.

I grew up in a small town about 30 miles east of Rochester, NY. Winters there could be brutal. One year, I received beautiful new pair of boots which I loved, particularly for the joy with which they enabled me to engage in the marvelous sport of puddle jumping. One day when the ice and snow had begun to melt, I eyed a nice puddle and jumped in the middle sending a freezing splash in all directions. But wait, something was wrong — this was no ordinary puddle! This one was made to capture people, and I was captured! Frantic, I pulled one foot out, but no matter how much I tried, the other foot would not budge. My boot was stuck. I was stuck! I pulled and pulled until finally my foot came free in a soggy sock. My beautiful boot had been left behind, buried beneath the slush. My little mind was faced with a choice. Did I care enough about to do something? It only took a second to act. I loved those boots. I found a stick and began to fish. After what seemed like an eternity, I finally pulled out my boot. That’s the first time I ever went fishing and was glad to catch a boot instead of a fish. My desire with this book is to address some of those “stuck” moments we all face. I want to provide keys that will hopefully open a door or two that have held you back on the incredible journey of life. I say a door or two, or even three, because it’s almost always more than one thing that gets us stuck. Ah, but God—He is the change factor in all of this and in Him we can break free. 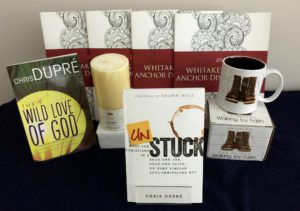