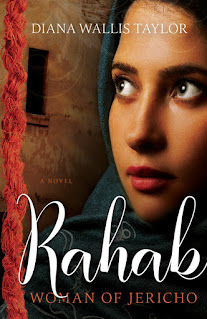 Some biblical scholars maintain that the woman in Jericho who hid Joshua’s two spies was a harlot or a prostitute. But if that was the case, how did this woman, Rahab, become one of the ancestors of Jesus Christ? Wouldn’t the Father ensure a pure lineage for His Son?
In this historical fiction, author Diana Wallis Taylor offers a beautiful story of intrigue that explains how Rahab came to be the mother of Boaz, grandmother of Obed, and great-grandmother of Jesse, the father of King David.

In Rahab, Woman of Jericho, readers discover a Rahab who is a descendent of the tribe of Ephraim, one of the ten lost tribes of Israel. Her clan left Egypt and settled in Canaan before the Hebrews were enslaved. Although they did not wander in the desert with Moses for forty years, nor did they hear the laws that the Lord gave to His people, they still worshipped the one true God.

Rahab marries Radames, a young Egyptian officer, who is to become the new governor of Jericho. They live in the Egyptian embassy set in the city wall. When the Israelites approach Canaan with their army, pharaoh sends word that he is withdrawing his troops. Radames fabricates a story to tell Jericho’s king, but Hammurabi doesn’t believe it…and he has his eye on the beautiful Rahab.

What will happen to Rahab after the lecherous king poisons her husband? How can she save her family from the invading Israelites? God parted the waters of the Jordan River for them—will He likewise provide miracles and blessings to her Ephraimite clan if they can rejoin their people?

If you’re looking for a clean, sweet romance with a Biblical backdrop this one is for you. It was certainly not what I was expecting, but the backdrop was clearly described, the characters were well developed, and the plot was easy to get hooked on. The author used mostly artistic license in my opinion to form the character of Rahab, but I did enjoy the faith journey that she grows in while facing many obstacles of her being a woman and being part of the culture she was. I really enjoyed the account of the Israelite spies and how the author weaves the artistic license in with the Biblical account. However, Rahab is not portrayed as a prostitute in the book, and while it would be a difficult task to characterize her as such in a clean Christian fiction, I feel like too much reality was stripped away. I felt like part of the heart of the story was cut out because it took out the part that God uses anyone and cherishes anyone regardless of their past. Overall if you’re looking for an intriguing sweet faith based romance, and not as concerned about the artistic license taken with a Biblical character, this one is for you.
I received a complimentary copy of this book, and all opinions given are entirely my own.


Diana Wallis Taylor is an award-winning author of more than a dozen books, including such novels as Hadassah, Queen Esther of Persia; Lydia, Woman of Philippi; Mary, Chosen of God; Ruth, Mother of Kings; Mary Magdalene; and Journey to the Well. She is also the author of Halloween: Harmless Fun or Risky Business?
Diana’s additional published works include a collection of poetry, Wings of the Wind; an Easter cantata, “Glorious,” written with a musical collaborator and available on Sheet Music Plus; and contributions to various magazines and compilations.
She received her B.A. in Elementary Education at San Diego State University and was an elementary school teacher for twenty-two years. She operated two coffeehouse/used bookstores and later retired from a private Christian college as Director of Conference Services.
Diana makes her home in San Diego, California. Readers are welcome to reach out to her and read her blog at www.dianawallistaylor.com.

At one large, ornate building that was obviously a temple, young women wearing flimsy garments, much jewelry, and elaborate make-up were lounging on the steps.
“Who are they, Radames?”
“Temple priestesses.”
“Women priests? They do not look like priests.”
He took a deep breath. “They are temple prostitutes who serve their god. By laying with a worshipper, they believe they assist him or her to honor their god.”
She put her hand on his arm. “I cannot judge others, but my people worship one God, Jehovah, who does not require that sort of worship.”
Radames seemed thoughtful and made no reply.
Her family had lived among the Canaanites for years, but she had never seen such a temple before. Beth-horon was so small—wouldn’t she have seen one if it was there? Perhaps her parents and their parents had endeavored to shield their children from the worst pagan practices.
Just before they returned home, she looked back at the palace, looming over the city like some evil monster. It sent a chill through her.
When they were safely in the embassy again, they sat in the dining hall and ate their mid-day meal: fresh bread, goat cheese, figs, and pomegranates, with a cup of beer for Radames and wine for Rahab.
Rahab turned to Radames. “My lord, the Canaanites have so many gods. You said you worshipped a fewer number. I am not familiar with Egyptian gods and would like to hear about them.”
He looked at her thoughtfully and took her hand in his. “Amon is the main one; he is considered the king of the gods and goddesses, and we believe he is father to the Pharaohs. His female counterpart is Amunet, called the Female Hidden One. They had a son, Khonsu, the moon god. Mut, which means ‘mother’ in Egyptian, is a deity who wears two crowns on her head. Osiris is considered the oldest child of the earth god, Zeb, and the sky goddess, Nut. He is the god of the afterlife. That is why many things are buried with the body when an Egyptian dies, so that he has what he needs in the life after death.”
She remained silent, listening, her thoughts twirling round about. She had married Radames out of love and her father had assured her that marrying an Egyptian was not forbidden because of their family heritage. But how was she to deal with a husband who worshipped idols? She smiled at him. “Tell me more.”
He sliced a piece of cheese and playfully fed it to her before continuing.
“Anubis is the divine embalmer. Before Osiris, Anubis patrolled the underworld. He is known for mummifying the dead and guiding their souls toward the afterlife. Horus is the god of vengeance and is the child of Osiris and Isis. He avenged his father’s death and ruled Egypt. Thoth is the god of knowledge and wisdom, who settles disputes between good and evil. He maintains the universe by his mastery of calculations. We believe him to be the author of science, philosophy, and magic. He is also the one who created our calendar. Sekhmet is the goddess of war and healing. She can destroy the enemies of her allies. Geb is the god of earth, who represents crops and healing. We believe he retains the souls of the wicked.”
It was a lot to digest. “Those are all your gods?”
He shook his head. “Only some of them, the most important ones.”
“And you worship all these gods?”
“When I am home with my family or with my soldiers, I profess to worship them. My father would be insulted and perhaps disown me if I even hinted that I did not.”
She stared at him, realizing what he had just revealed. Hope rose in her heart. “You say that as if there is something else you believe.”
Radames hesitated, as if uncertain how to proceed. “I don’t know,” he said finally. “I have grown up with all our gods, but prayers to them are not answered. I have not mentioned this before, beloved, but I was married years ago, at the age of eighteen. My wife was only fifteen. Both she and our infant son died in childbirth a year later. I made offering after offering to the gods, praying for her to live, but there was no answer—and no comfort. So I do not put my faith in any god.”
Rahab reached out to touch his arm. “Oh, Radames. I am so sorry about your wife and child. That must have been so hard to bear. Did my father know of this?”
“I told him that first night I came.”
“And what did he say?”
“He said that I may someday wish to speak to you about your God…when I am ready to do so.”

For Him and My Family, August 13

For the Love of Literature, August 18

She Lives To Read, August 20

Lights in a Dark World, August 21

To celebrate her tour, Diana is giving away the grand prize of a $20 Starbucks gift card!!
Be sure to comment on the blog stops for nine extra entries into the giveaway! Click the link below to enter.
https://promosimple.com/ps/feba/rahab-celebration-tour-giveaway